Seeing Black History Through Another Lens 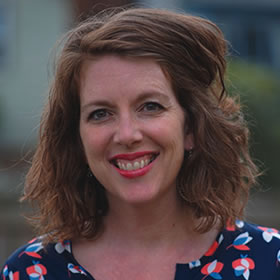 There is neither Jew nor Gentile, neither slave nor free, nor is there male and female, for you are all one in Christ Jesus. Galatians 3:28

My friend Shannon and I wove our way through the National African American Museum of History and Culture in Washington, DC. Two days before, we’d sat at the feet of Mama Ruby, and now, on our last full day of the pilgrimage, our bodies ached with a wild kind of exhaustion. Desperate to return home, I longed for enough time to filter all of the information I’d internalized that week. Shannon longed for respite too, but hers included a recess from the pain of her body. Still recovering from double knee surgery, her legs screamed in agony. Occasionally, she walked without assistance, but sometimes she needed her walking sticks, and sometimes her wheelchair. That day in the museum, her body begged for the comfort of her chair.

We were mostly silent as we wheeled through the museum, and an elevator took us to the basement, into the hulls of slave ships that transported millions of Africans from their home countries to Europe, the Americas, and beyond. We made our way through darkened, narrow passages designed to resemble the cramped living conditions of the ships. Our minds and bodies were transported to our country’s beginnings, to the 1400s, when slavery around the world was a temporary status not based on a person’s outward appearance. With each sideward glance, the wheels of Shannon’s chair clicked in rotation, just as the years ticked upward too. We traveled through the 1600s and into the late 1700s, the murals and quotes and wax depictions of each scene an aching remembrance of injustice. But when we got to 1776, we stopped and stared at an irony of massive, bolded words slapped onto the wall daring us to disagree.

All men are created equal . . .
With certain unalienable rights . . .
Whenever any form of government
Becomes destructive of these ends,
It is the right of the people to alter
Or to abolish it.

The gilded letters of the Declaration of Independence rose above the atrocities of injustice, its message the greatest paradox of liberty. Sure, the statement was true for those of us born with white skin, but it wasn’t true for everyone. By the American Revolution, slavery was an institution, a racial caste associated with African ancestry. America was a country built on the backs of slave labor and upon land stolen from the native population. Then, in 1787, the government mandated that a black person be counted as only three-fifths of a white person for purposes of determining representation in Congress. Black people were held to be less human than white people. In the eyes of the government, African Americans had not been created equal, nor did they possess certain unalienable rights, and now, nearly 250 years later, this inequality still exists. We continue to cling to hope for millions of black and brown Americans still treated like chattel by systems of injustice, for those yet to possess equal dignity in the eyes of the government and their fellow countrymen.

For too long I refused to let myself see history’s one-sided affair, listening to and learning from the stories of my past, stories told from the point of view of the oppressors. But now, I didn’t know where I fit in. I’d begun to examine history through another lens.

Shannon and I journeyed upward, ascending wide ramps to the 18th and 19th centuries. Every inch of the museum
told the stories I had not always cared to hear, provided quotes I had not always taken the time to read. By the time we reached the early 1860s and stood before Lincoln’s Emancipation Proclamation, I yearned for hope, desperate for a sliver of optimism in a decree I’d long thought ended slavery once and for all. But as Shannon and I looped around the next corner, we came face to face with the Jim Crow laws, with our country’s hideous legacy of lynching, with the atrocities of sharecropping. By the time we reached the mid-20th century, I wanted to run to a dark corner and hide, crouching like a small child trying to escape, like a little girl who doesn’t want to be seen. I didn’t want to be a white woman in that space, because I didn’t want to carry the injustice—the injustice that was mine—on my shoulders any longer. I wanted a thousand absolutions to release me from the pain, to free my lungs of the sobs welling up inside.

But as the hours ticked by, I knew this pain was mine to hold. No longer did I have the right to walk away or to distance myself from the atrocities. I was bound both to the stories of the oppressed and to the oppressor, to histories I couldn’t rewrite and to futures I desperately hoped to change. 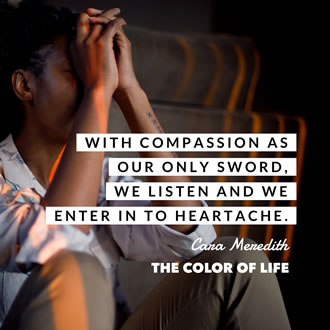 A month later, Shannon and I traded text messages, piecing together our experiences of the pilgrimage and of the contrasts between she who sat and she who stood. Shannon, a white woman, is the mother of six biological and adopted children, her heart a perfect blend of sass and holiness, her words a sounding board for truth. Without a doubt, she is unafraid to proclaim a gospel of verity from the mountaintops. Like me, she tries her hardest to leverage her privilege to give voice and face to the marginalized.

In the museum that day, we wore matching T-shirts that said, “We are our foremothers’ wildest dreams,” but I wondered whether that was actually true for either of us. She was probably more like the worst nightmare of her ancestors, who owned and operated a southern plantation. Her parents grew up with a normalized view of segregation. They didn’t fight against it. A year before our trip, she wrote, “I haven’t been to the museum yet, but I expect there are exhibits on slavery. My ancestors include white slave owners in the South. That’s my history too.” As I wheeled Shannon through the museum that day, she examined everything through a lens not of the present but of the past, of the oppressors who rallied against the freedom and rights of African Americans. Meanwhile, I was a nightmare of a different sort: I saw the exhibits through the eyes of my husband and my children’s ancestry, of the oppressed who fought for freedom and for the rights they deserved. I looked for an escape from the pain, for a way to hide from my skin. There, I found refuge in the oneness I felt with the mother of a slain boy.

I don’t always readily enter lament. I often want a happy, hopeful version of Jesus, a personal savior to call my own. I want to skip entire portions of the church calendar, ignoring the dreariness of Lent and of Advent so I can get straight to the hope and glory of Easter. It’s as if I stand in my son’s preschool classroom and point to the poster of cartoon faces on the wall. Although it illustrates 30 different feelings—hysteria, sadness, anger, confusion, lovestrickenness, and boredom, among others—I often want to permanently reside in the land of happiness. I want a quick fix for my experiences of racial brokenness. I want to slap a Band-Aid® on the problem of pain, especially if I feel shame, especially if the burden of guilt lies on people who look like me. But this is no way to live, for this is no way to heal, nor is it any way to grow.

We were not made to experience only a single emotion. We were created to experience a myriad of feelings, including deep pain. So we are also to be people of lament, to voice holy complaints and protests and griefs aloud, to enter the brokenness of injustice and pain.

Lament teaches me to shed light on stories of sorrow, to dig up the burdens of oppression for both the oppressor and the oppressed. When tragedy strikes, I no longer ignore suffering and death in the world around me but I take notice. I pay attention to the hate, noticing the ways history has often been painted by a white point of view. But I don’t stop there. I take action. I enter the sorrow of injustice, mourning with those who mourn, weeping with those who weep. I breathe in the wounds of the unknown among me, of the immigrants and refugees and asylum seekers in my midst, of the black and brown brothers and sisters in my neighborhood and in my city whose injuries I have not cared for. I sit with the pain I have inflicted on others. I mourn the pain others have inflicted on me.

No longer do we ignore the suffering and pain and death of others, but with compassion as our only sword, we listen and we enter in to heartache. We don’t bind ourselves with apathy, but we pay attention to the past and we drink of the present, eyes opened wide toward the future. Then, balancing on a scale of hope and lament, we cry out for justice and for peace, for ourselves and for the world around us. These are our fellow human beings, after all.

That day in the museum, though, no part of me wanted to participate in or pass on a legacy of hate—not to my children, my husband, my brothers and sisters of color. But walking forward means embracing every part of my story, including the parts I want to forget and the parts I want to be absolved of responsibility. It means stepping into places of sorrow, letting the tears fall, dressing in uniforms of lament. 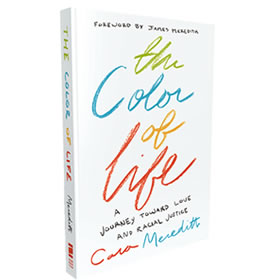 Adapted from The Color of Life: A Journey Toward Love and Racial Justice by Cara Meredith. Click here to learn more about this title.

In The Color of Life, Cara Meredith, white wife of the black son of prominent civil rights activist James Meredith, asks how do we navigate ongoing and desperately-needed conversations about race? How do we teach our children a theology of reconciliation and love? And what does it mean to live a life that makes space for seeing the imago Dei in everyone? Cara’s illuminating memoir paints a beautiful path from white privilege toward racial healing, from ignorance toward seeing the image of God in everyone she meets.

Cara grew up in a colorless world. From childhood, she didn’t think issues of race had anything to do with her. A colorblind rhetoric had been stamped across her education, world view, and Christian theology.

Then as an adult, Cara’s life took on new, colorful hues. She realized that her generation, seeking to move beyond ancestral racism, had swung so far that they tried to act as if they didn’t see race at all. But that picture neglected the unique cultural identity God gives each person. When Cara met and fell in love with the son of black icon, James Meredith, she began to listen to the stories and experiences of others in a new way, taking note of the cultures, sounds and shades of life already present around her. After she married and their little family grew to include two mixed-race sons, Cara knew she would never see the world through a colorless lens again.

Cara Meredith is a writer and speaker whose work has appeared in numerous print and online publications, including Christianity Today, iBelieve, and For Every Mom. A former high school English teacher and outreach ministry director, she holds a Masters of Theology from Fuller Seminary. She lives in the San Francisco Bay Area with her husband and two sons. Learn more at www.CaraMeredith.com.