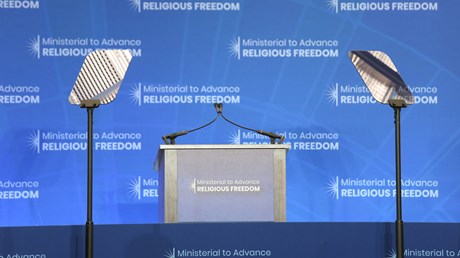 Amid the COVID-19 pandemic, the third Ministerial to Advance Freedom of Religion or Belief was hosted this week outside the United States for the first time—in Poland.

Next year it will take place in Brazil.

Launched in 2018 by the US State Department, the ministerial brings together the world’s top diplomats to ensure religious freedom remains an integral focus of international foreign policy.

The focus is necessary: 80 percent of the world’s population lives in nations that restrict religious freedom, according to the Pew Research Center.

And the pandemic has only increased persecution.

“The need to expand religious freedoms and protect religious minorities has become a global priority.”

The novel coronavirus took center stage at the two-day conference, hosted virtually by the Polish Ministry of Foreign Affairs.

Gayle Manchin, chair of the US Commission on International Religious Freedom (USCIRF), said restrictions on religion began as early as March.

In Sri Lanka, authorities ignored Muslim objections to cremation, despite health assurances there could be no transmission from a cadaver.
In South Korea, the government moved against the Shincheonji Church of Jesus sect after it became the center of the nation’s initial outbreak.
In Iran, despite a widespread release of prisoners that included some Christians, officials transferred Sufi Muslim prisoners into wards with known cases of COVID-19.
Saudi Arabia restricted movement in its Shiite-majority eastern Qatif region, wary of early widespread infection in Iran.