The 144 Million and Counting

A historic election turnout augurs well for American democracy. But there is greater truth than voting can determine. 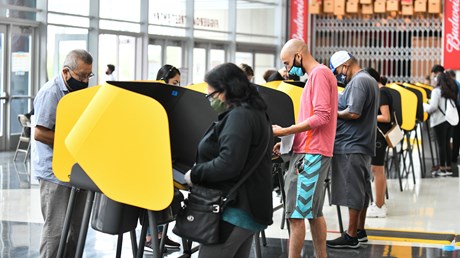 Turnout for this presidential election looks to be the largest in 120 years. Partisan passions over the past four years ramped up to the level of life-or-death seriousness due to the coronavirus pandemic. Many insisted the soul of the nation was at stake. What’s incredible—despite all the worry and Democratic candidate Joe Biden’s likely victory—is how little the landscape shifted. President Trump’s defeat, welcomed by half the country (with the most votes ever for a presidential candidate), was bemoaned by the other half (with the second most votes ever for a presidential candidate). Moreover, the Democrats’ win of the White House ended up mitigated by Republican gains in the House and likely control of the Senate, contradicting most polls and cocksure forecasts of a blue tsunami.

David French likened the election to trench warfare during World War I. “The combatants on the Western Front expended an enormous amount of blood and treasure to move the lines a mile here and a mile there, only to see them snap right back after the next counteroffensive. The effort was overwhelming. The gains were often nominal.”

And yet, election day proved surprisingly peaceful and orderly, an astonishing display of the power of American democracy; that “government of the people, by the people, for the people” has not yet perished from the earth. Moreover, a Biden presidency may portend the end of religion as political weapon and free it for serving the common good.

Christian eschatology presses toward a day when God’s goodness, freedom, and justice are common fare. Revelation 7:9 envisions an epic turnout of billions, “a great multitude that no one …