When I Had No Heat, You Welcomed Me: Texas Churches Offer Refuge

With freezes knocking out power across the state, ministry networks rally to help. 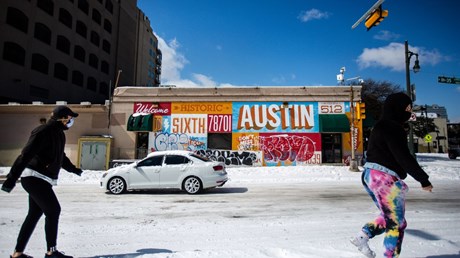 In the deep freeze that has taken electricity from millions, cut water supply, iced roads, and disrupted communications, not even Texas’s churches can provide reliable sanctuary—but leaders are doing all they can to connect and comfort their communities.

“We were a little late to the game on the warming station because the church lost power for a while as well,” said Steve Bezner, pastor of Houston Northwest Church.

Once the building opened on Tuesday afternoon, more than sixty residents came through to escape the cold and charge devices during the day, and the church has also covered hotel stays for people without a warm place to sleep.

The state is going on four straight days of widespread power outages and freezing weather, a crisis so widespread and dire that families are warming up in their cars or venturing to places still on the power grid, such as friends’ homes or churches like Bezner’s.

During the unseasonably cold temperatures, down to single digits, ministries are scrambling to offer shelter, distribute blankets, and provide food for people living on the streets, such as those in the downtown Austin homeless encampments that have swelled over the pandemic.

Down the street from one encampment, Christ Church of Austin closed its building after burst pipes flooded the building and blew the electrical system—unable to take in its neighbors or to offer the Ash Wednesday courtyard service and drive-through ashes as planned.

Christine Warner, the Austin-based director of the Anglican Church in North America’s Matthew 25 Initiative, described how, in a demonstration of God’s kingdom, “the vulnerable are serving the vulnerable.” People are taking care of one …