Most Kenyan Churches Ban Politicians from Pulpits, Except for Methodists 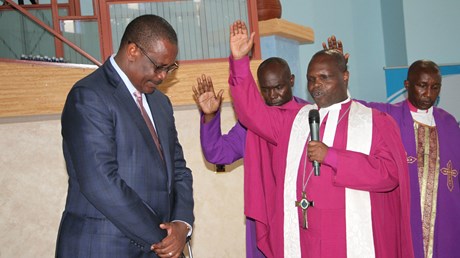 Some churches in Kenya have barred politicians from addressing their congregations, saying campaigning during services disrespects the sanctity of worship.

The national Anglican, Presbyterian, Roman Catholic, and evangelical churches have all issued bans, as many politicians have begun early stumping for next year’s general elections and as COVID-19 public health measures have restricted how and where campaigning can take place.

The Methodists, however, are keeping the church doors open for all.

Joseph Ntombura, presiding bishop of the Methodist Church in Kenya, has said his church is not dissenting from the effort, but is taking a different approach. The bishop said shutting the doors to politicians would mean discriminating against some of its members.

“The church is for all people,” Ntombura told RNS in a telephone interview. “Human beings are political, so there is nothing wrong with inviting the politicians in church.”

According to the bishop, congregations need to hear the views of politicians on issues of national interest, such as the sharing of resources. In the past, Ntombura said, the church has invited other experts to speak to congregations on important matters, and politicians are no different.

“Some of the politicians are our pastors,” said Ntombura.

Kenya is about 85 percent Christian. About 33 percent of that group are from historic Protestant denominations and about 21 percent are Catholic. The rest belong to evangelical, Pentecostal, and African denominations. Muslims make up 11 percent of the population.

In issuing the bans on politicking in church, denominations have said they feared that church services would become campaign rallies and that candidates would use language …